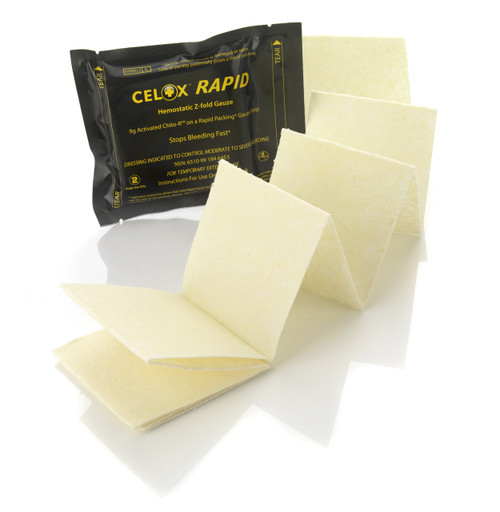 RAPID PACKING
Celox™ RAPID 5’Z-Fold packs faster than other 12’competitive gauzes. RAPID has demonstrated faster packing in both In Vitro and  Field Testing. On average, the time taken with Celox™ RAPID  was half of the time with either of the other two products(1) (Combat Gauze™ and ChitoGauze™)

Celox™ RAPID speeds up compression time. This is demonstrable based on in vivo results that are similar or better after one minute than results after three minutes compression for ChitoGauze™ or Quikclot Combat Gauze™ in previous studies.

STABILITY IN EVACUATION
Celox™ RAPID maintains its volume and adhesion to wet tissue during use, helping it to stay in place during patient transport and maintain hemostasis during transit. In comparative testing against Chitogauze™ and Combat Gauze, Celox™ RAPID demonstrated significantly stronger adhesion after treatment at time intervals of one minute, three minutes and twenty minutes. Because Celox™ RAPID sticks to wet tissue, its use results in performance benefits including hemostasis speed, reduced blood loss and safer transit of severely wounded patients. (3)

Celox™ RAPID with Chito-R™, addressing the significant capability gap of the current standard of treatment for hemorrhage control. Celox™ RAPID can eliminate the compression step entirely after packing.