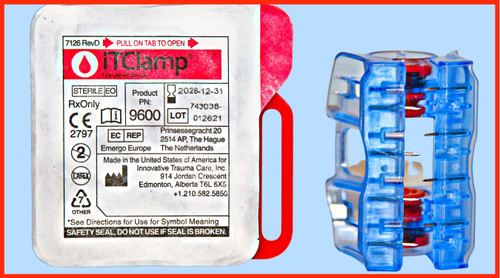 The iTClampTM50 quickly controls critical bleeding by closing the skin to create a temporary, contained hematoma until surgical repair. The iTClamp50 is a self-locking surgical clamp with suture needles that penetrate the skin to evert the skin edges between pressure bars of the device and anchor it to the skin to reduce slippage and leakage. Pressure is evenly distributed across the bars, which seal the skin over a wound. An adjustable locking mechanism increases or decreases pressure across the wound to achieve a fluid tight seal.

BACKORDERED UNTIL END OF JANUARY 2022.

CONTRAINDICATIONS FOR USE: The iTClamp50 is contraindicated where skin approximation cannot be obtained (for example, large skin defects under high tension).

WARNINGS: • This device is intended for temporary use only; use beyond three hours has not been studied. • Patients must be seen promptly by medical personnel for device removal and surgical wound closure. • Only use device as directed to avoid needle stick injury. • Do not use where delicate structures are near the skin surface, within 10mm, such as the orbits of the eye. • Will not control hemorrhage in non-compressible sites, such as the abdominal and chest cavities.  • Ensure personal protective equipment is utilized to protect against potential splashing of blood during application.

PRECAUTIONS: • Single-use, disposable device; not for reuse. Re-use of device may cause cross contamination, leading to patient risk and complication(s). • iTClampTM50 is provided sterile (sterilized by EtO). Do not use if sterility seal has been tampered with or packaging is damaged. • Not compatible with Magnetic Resonance Imaging (MRI) procedures. • Dispose of the device in accordance with local guidelines for biohazard sharps. • The device and/or component(s) are not made from natural rubber, latex free.

DIRECTIONS FOR USE: The iTClampTM50 controls bleeding by sealing the skin closed to create a temporary pool of blood (hematoma) under pressure. This permits formation of a stable clot until surgical repair can be obtained.

Hemostatic gauze can be placed inside wound before iTClamp50 application.

1. Open the package by pulling forward on the outer tabs.

2. Remove the device from the package by lifting up, taking care not to close the device until it has been applied to the wound. NOTE: Device seal will hold device open until broken.

3. If the device has inadvertently closed, push the side buttons inward with one hand, and pull the device open with the other hand.

5. Align the device parallel to the length of wound edge. Position the needles about 1-2 cm (0.5-1 in.) from the wound edge on either side .

6.Press the arms of device together to close the device. Device seal will break with pressure, allowing device to close .

7.Ensure the entire wound is sealed and bleeding stops.

NOTE: More than one device may be required.

a. If bleeding continues while the device is in the correct position, close the device more firmly by applying further pressure to the arms of the device.

b. If bleeding continues because the wound is too large, apply a second device to the open section.

c. If bleeding continues because the device is not positioned correctly, remove the device according to instructions and reapply.

The Survival Medicine Handbook: The Essential Guide For When Help Is NOT On The Way, Fourth Edition, Black and White or Color (upgrade)